La Chatte Noire (The Black Cat) is a series of studies, mostly advertising posters, product labels and packagings. I draw them in my spare time after a personal interest in art - particularly advertising art - of the years from around 1890's to around 1930's.

Who is the Chatte Noire?

She is a young Exotic Shorthair cat, obviously black. Her name is Bastet. She was named after the Egyptian cat-headed goddess of the family and the fertility.
Bast - as we shortly call her - is a playful happy kitten, friendly towards almost everybody. She even owns a dog, and she's rather proud of him. Bast took possession of Melampo, the family poodle, immediately on her arrival at home. Much to Melampo's satisfaction, the two are used to sleep together on a settee, thus keeping each other warm and comfortable.
I suspect Bast is not quite aware of her leading role as the ultimate advertising testimonial. Or maybe she is. Difficult to tell from her purr. Luckily, success did not change her.

How did it all begin? 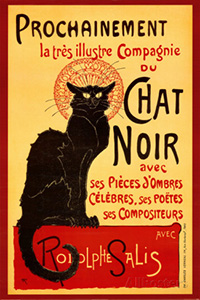 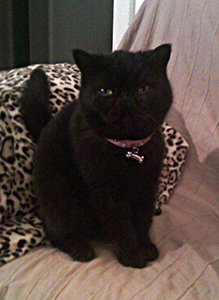 I'm sure you remember Steinlen's world - famous ad in picture 1, featuring a black cat in a steady and fierce attitude.
The cat in picture 2 is Bast.You can see it for yourself. How could I have resisted the temptation? Et voilà la Chatte Noire. (Picture 3)
After that, I felt that Bast had enough sense of humour to be involved in the advertising business. So I went on imagining situations and products to be advertised, with an only and unique testimonial.
Bast, as an experienced actress, can indifferently play female of male roles, according to the business requirements.
Most of the product advertised are from the Belle-Epoque, and - I'm almost sure you had guessed it - none of them is real. I tried, however, to be a little accurate about the timing. In the ads in which you can read a date, I checked it was realistic. Le Vrai Pastis won its awards after 1915. L'Absinthe is from the nineties. La Bière d'Alsace was brewed when Alsace was German (yes, before the Great War).

Why so many ads in French?

Why not? French ad artists were very prolific, and some of them are among the actual originators of the trade. I've done a couple of ads in English, but there's no stated rule on this. I don't choose which idea should come first. Maybe Bast does.

We'll see. Should the cat and I get bored, I'd stop the series.
If anyone is interested in hiring Bast as a testimonial to advertise anything, ask me and I'll ask her agent.

This is actually a new step. But it's in too early a development stage to be displayed.

All rights about the cat, its representation, the ad posters, the labels, the trademarks and the products advertised are strictly reserved.
Low-resolution versions of the images are available for free download from this website, but no image may be redistributed or used anyhow for whatever commercial purpose without my explicit permission.

As I said, none of the products or firms or brands depicted is real. They're all completely fictional. (At least I hope so, I wouldn't like to drink purified rain water bottled in France or anywhere else)
In case some of the products may resemble or remember actual products, it's because the fictional product has been designed as something pretending to be way much better than it is.
Despite the jeopardy Bast has apparently been exposed to, I'm proud to say that no cat was harmed in the making of the "Chatte Noire" series. Melampo personally monitored all the actions on stage.