Home Get in TouchThe Company Our Services ▼

The Emblem of Origins

The former Emblem
Even if outdated and strongly geometric, this Emblem had been characterizing a long period in Croce Bianca's aesthetics;
the new design had to outline evolution trend to insert in, and not to set itself as a break in the Association's stylistic continuity.

In respect of the love for tradition pervading the Society, active in Savona since 1899, I decided to reinterpret the shield of origins according to former emblem's trend, which enhanced more the very Cross against its background..

The new shield, after freehand sketches, was drawn by a CAD program to easily elaborate its geometry. This consists exclusively of circle arcs, avoiding mathematically complex curves, which were not necessary and which could result in difficulties in reproducing the emblem in engravings, molds, and in other applications to be easily machined. 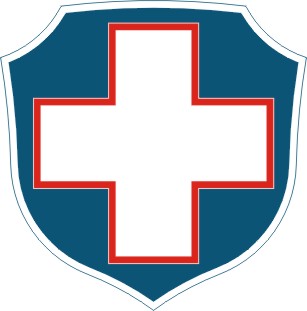 The new Emblem
The Shield of origins is back, with classic outlines and modern proportions.

All further phases were developed by a vector graphics program.

Perfectly coordinated to inscriptions, the emblem is now proudly standing out on each White Cross ambulance
Respect

Designing a new trademark is not always a breakthrough: the client's history and evolution are important matters to treat with respect.