Home Get in TouchThe Company Our Services ▼

Born to improve performances of the great chain-saws with an arm up to three meters (120") used in slate quarries in Val Fontanabuona (province of Genoa), this ingenious chain, whose link is reproduced in the picture above, is being produced in series by Officine Meccaniche Garrone of Cicagna (Genoa).

Extremely compact, such a link allows a reduction of the pitch between cutting tools up to 20 % as compared with the best competing chains, with a remarkable increase in cutting speed at the same installed power.

Carefully designed in six months, the chain was granted two patents in 1990.

In the picture below, the links of the first derived version, smaller than the original, used in chain saws up to 1.2 m (50"). The linking pin and its simple retaining screw are visible as well.

Derived version make this project a family of chains, successfully used even in quarrying stones different from slate.

As DITEL discontinued their activity in the middle of the nineties, further developments of this project were carried on by Officine Meccaniche Garrone, ( www.garrone.com ) the actual producer. 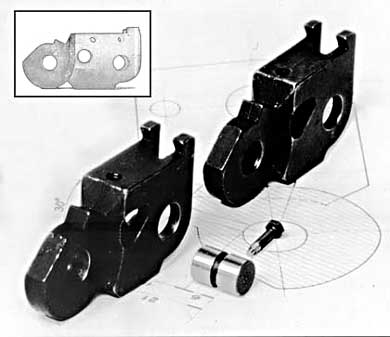 Someone, during the early project phases, didn't believe such a link was possible. The ultimate version was # 24, an it came after 20 weeks. But it worked, fast and silent.